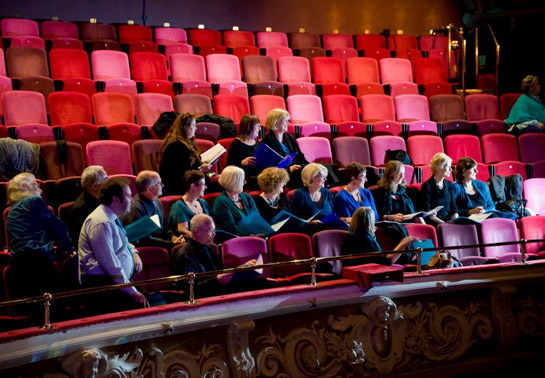 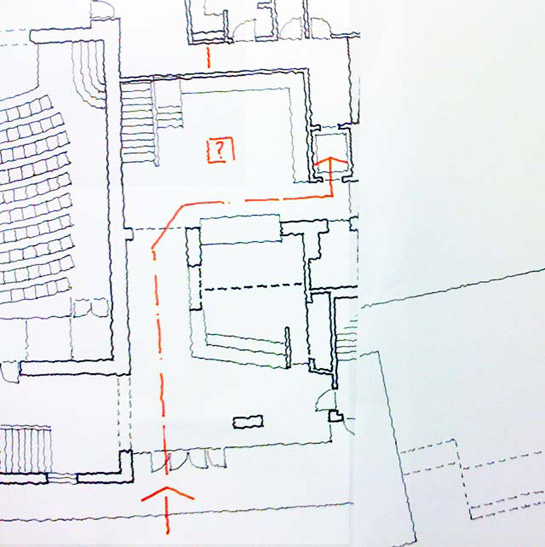 On the 31st October, artists, musicians, dancers, writers and other creatively inclined individuals and groups from the Winchester district occupied the stage and architecture of the Royal Theatre, Winchester. Unlike the worldwide occupy movement, this occupation was curated by Trisha Bould at the invitation of the theatre and was part of an opening event for the Ten Days Across the City, arts festival. Beginning at six and ending at the stroke of midnight, Map, Plot, Plunder and Possession led its audience behind the scenes of the theatre, into the normally concealed backstage areas of the building.
As part of the event, I composed a cycle of three soundscapes for the auditorium and a sonic river for the public address system. The cycle included soundscapes from the winnall moors sound walk project and Winchester Cathedral, that had been specifically re-composed for the site of the auditorium. In between the two soundscapes, I inserted a percussive interval created by evoking sounds from the lighting and scenery rig of the stage; swinging the descended rigging and occasionally hitting it with a toy xylophone mallet.
The soundscapes were intended to inhabit the acoustics of the theatre and act as a consistent cycle of sound spaces that would come into contact with other acoustic events taking place during the evening. This included; a rehearsal of a song by the Winchester Community Choir from the theatre circle; and the indeterminate composition Copy Rite by Hossein Hadisi and other members of ACE (Avant-garde Composer’s Ensemble).
The choir began their rehearsal in the percussive Interval, before being acoustically repositioned into the soundscape of Winchester Cathedral, the opening of the Cathedral gates, the organist at practice. Perhaps most pleasurable was the choreographed pile up of rehearsal as the community choir’s preparations collided with the Pilgrim school rehearsing in the Cathedral.
In Copy Rite, Hossein Hadisi and the other members of ACE (Sam Cave/Guitar; Tom Green/Piano & Ignacio Agrimbau/Gyil & Hulusi) moved around the theatre between pre-arranged sites within and without the auditorium: a piano in a stairwell, a guitar on the first floor of the atrium. The sounds of the auditorium were fed back into these satellite positions, all the musicians responding to the sounds, acoustics and other visual events occurring around them. Both the choir and Copy-Rite, created some rather unrehearsed collisions with the continuous cycle of soundscapes. 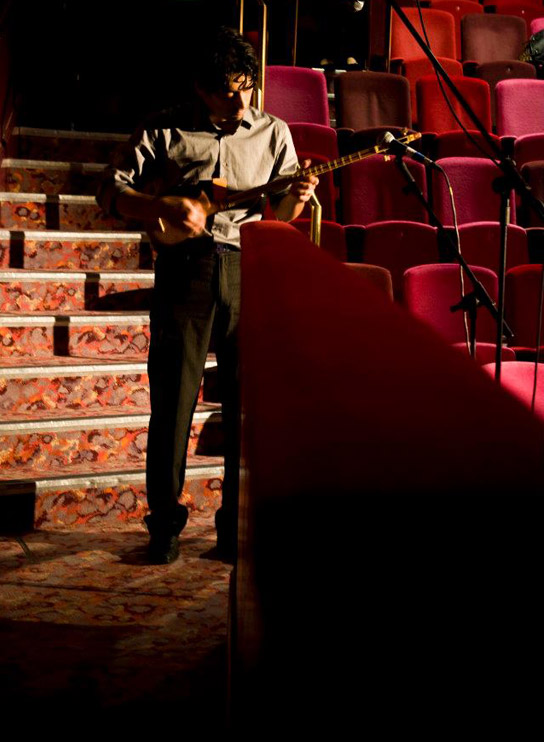 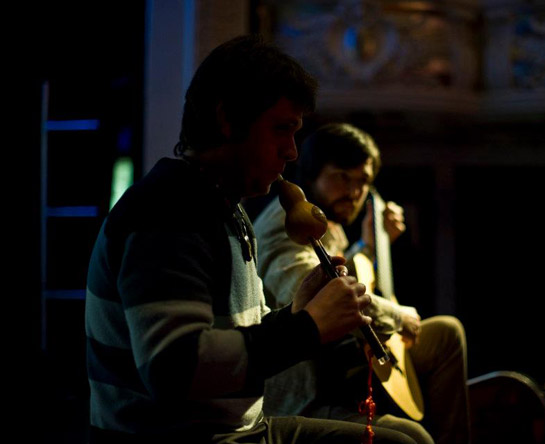 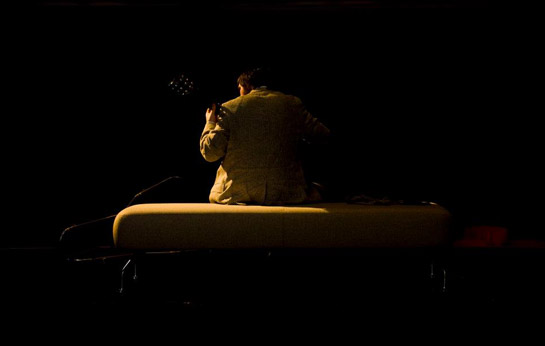 The peripatetic music of ACE, mingled not only with its disparate musical parts, but also the acoustics of the theatre and the patterns and dynamics of the entire recorded and existing soundscape. The sonic river, composed entirely from the sounds of water from winnall moors, leaked, flowed and dripped into the acoustics of the architecture. In the front of house speakers the water generated small wet, but distinct pockets of sound. In the non-space of the corridors the speakers created a ventriloquial soundscape, the echoic drips evading location. In the atrium, the dripping of water echoed the pluck of guitar strings, the river seeming to rain down from the heavens, although the speakers were actually located. A fragment from this unpredicted duet appears on the winnall moors sound walk blog, along with a section of the unaccompanied sonic river.
All photographs by kind permission of David Gibbons. 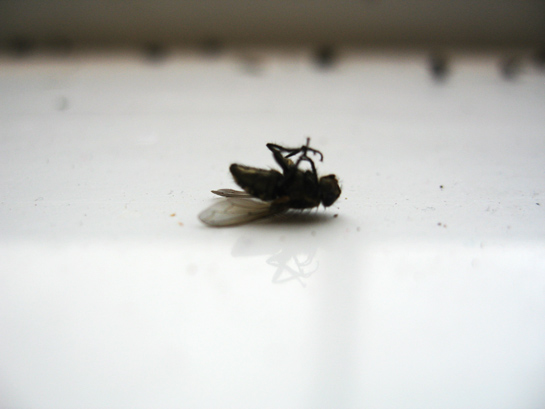 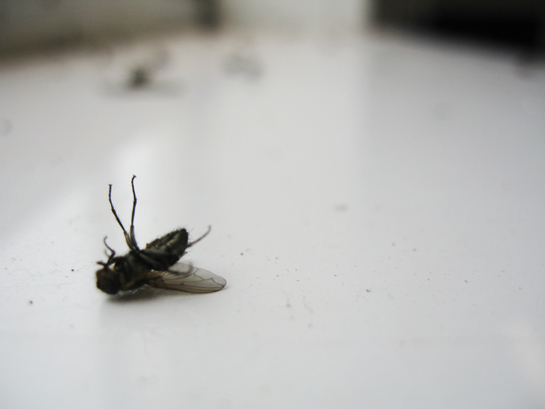 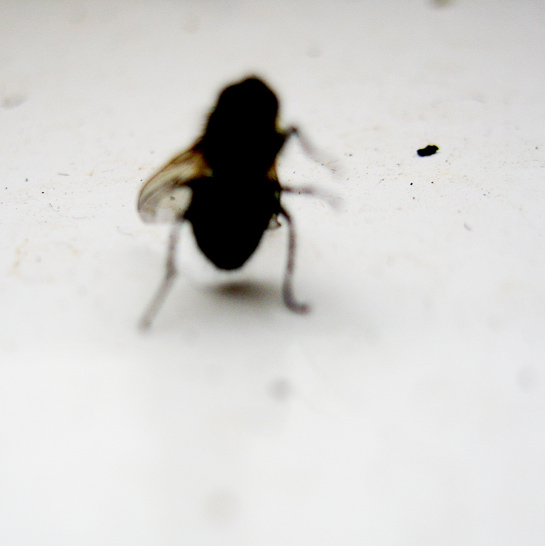 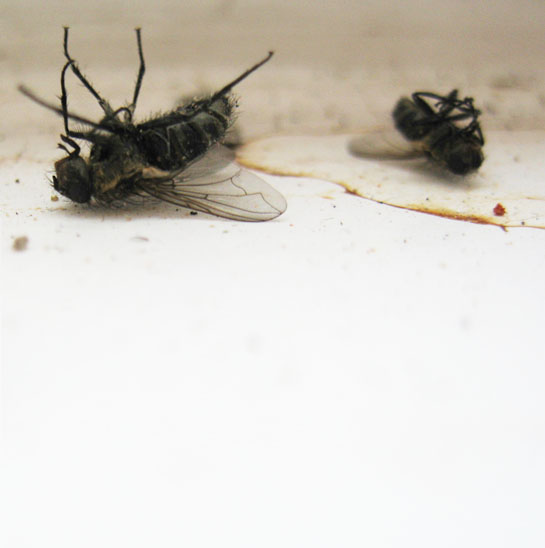 ‘Serendipity: making discoveries by accident and sagacity, of things we are not in quest of’.

After discovering a large amount of flies dying or approaching death at the Frieze Art Fair, I had not given their demise another thought. But on Friday, I rolled open a blind in a room at work (appropriately numbered 101) and there discovered a quiet holocaust: a windowsill landscape of dead flies. Most of the flies were dead on their backs, but others seemed to have just fallen over, whilst one was in a strangely erect position, as if addressing the other members of the necropolis. There was definitely something of the Pompeii in the flies’ deathly arrangement. One fly occasionally moved a leg, whilst the remaining extant fly, wandered around on a sky, cruelly visible through the glass pane of the window.

Exposing a rather Warholian disposition, I went to get my camera, so that I might visually seize the poor flies in their moribund tableaux.
I read a story once that, when Andy was informed one of his ‘friends’ had just leapt from a building to his death, Andy replied, “I wish he had told me, I could have taken my camera and filmed him”. Which may appear heartless and cruel, but then again if the call had been made and Andy and his Bolex arrived, then this sad anonymous exit may have been remembered; a life disappeared, would be framed and possibly immortalised through the 16mm lens of Andy’s ‘ocular vampirism’.
Not that I would claim to be immortalising the brief lives of these poor flies. No, there is just something very sad in the quiet recent death that hides behind the closed blind of a window.