I recently composed a new soundwork for Sonospace, the online sound art gallery, curated by Harry Sumner. The piece is based on field-recordings made on a short walk through the water meadows near St Cross Hospital in Winchester. This path follows the River Itchen and is part of Keats Walk, which retraces the steps of the poet who visited Winchester in 1819. On the 19th September 1819, Keats traced the river, through the meadow and along the desire line of this footpath. Returning from his walk he composed Ode To Autumn, a poem of three stanzas in which language pronounces a landscape trembling with sound:

Hedge-crickets sing; and now with treble soft
The redbreast whistles from a garden-croft;
And gathering swallows twitter in the skies.

I did not choose my route for its association with Keats, although, like him I was drawn to the soundscape of the meadow. I have walked the trail many times, although only recently have I noticed a particular note hanging in the landscape. As I approached St Cross, a distant and quiet whine appeared, a ‘treble soft’, on the cusp of audition, intermittent yet regular. Approaching closer, the whine was joined by others in a phased pattern of plaintive cries, at once near and at a distance. The sound, as fragile as swallows and reminiscent of the electronic whistle of radio tuning, seemed to possess a form; an acoustic arc, that begins, curves and closes. The arc turned out to be the sound of people moving through the landscape, opening and closing the four kissing gates[1], which interrupt the path. As I meet the first gate and perform the choreography of its action, lifting the latch and swinging the kiss of its arc, I hear space opening and feel the vibration of its close in my hand. The sound trembling through my body causes a blurring of the distinction between the materiality of my body, the gate, and the landscape. In the sounding of our ‘vibrant matter’, the material and immaterial are hinged. 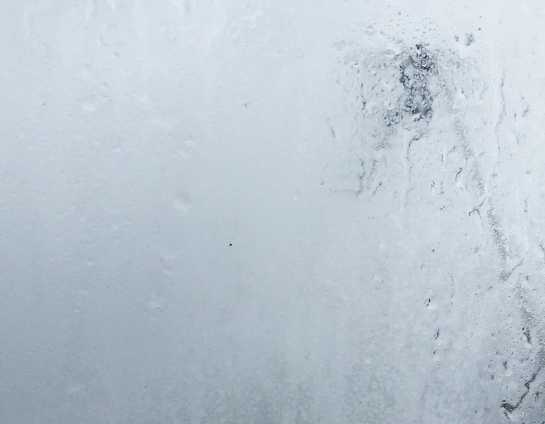 The physicality of the gesture and the vibration it creates, directs attention away from the surface and toward the interior, the whine being only the audible tip of a soundscape detained in substance: a ‘Music, slumbering’ (Coleridge) inside the gates metallic arch.
In a line with four arcs, contact microphones are used to record and listen to this internal soundscape. Recording each gate in succession, a line of movement is mapped through a landscape, and the abstract terrain beneath the visible uncovered. Distinct from the ‘soft floating witchery of sound’ present in Coleridge’s Eolian Harp, this micro-phonic contact reveals a ‘wailful choir’, a mournful howl of space rent open. Awoken from its slumber we can hear substance singing as it disappears.

The exhibition in Sonospace allows images to be used with the sound exhibited. I wanted to emphasise the abstract qualities of the work, so rather than simply using imagery from the walk, I decided to appropriate images from other sources: images e from other places, but which seemed to correspond with the sound of the arc.

a line with four arcs in Sonospace

[1] A ‘half-round, rectangular, trapezoidal or V-shaped enclosure with a hinged gate trapped between its arms’, a kissing gate is so named because of the gentle collision of its close: ‘to kiss, to caress, to ‘touch gently’. The word ‘kiss’ is onomatopoeic in origin: ‘an imitation of the sound of the thing meant.’