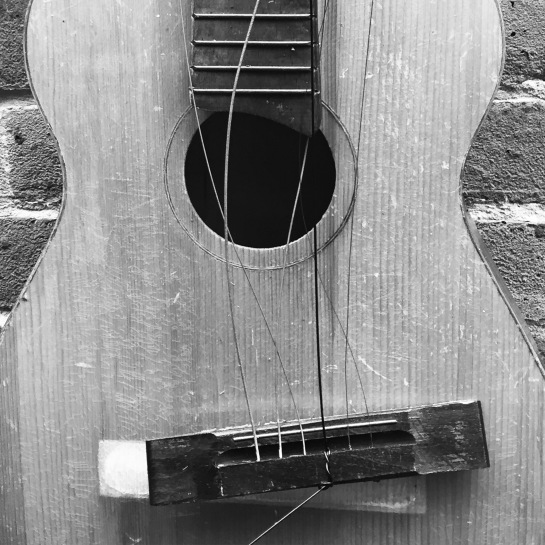 I am delighted to be included in the programme for Datscha Radio 2017. From the 25th August the German radio station will be broadcasting ‘a garden in the air, combining radio, gardening, hospitality and contemporary discourse in a live radio festival from a garden in the north of Berlin.’ The five day radio festival will also be available as a live stream via the Datscha Radio website and subsequently archived online.

The work included was composed specifically for the festival and is based on a series of new field-recordings, which take full advantage of a particularly dank English summer. The field in which I recorded is local and colloquial; that is my own back garden, of uneven bricks, plant pots and things I must at some point do. Things get left in back gardens; they escape use and end up there, waiting for attention, purpose and repair. The nearness of such an enclosed field is helpful to the act of recording rain. I am close to my recording equipment and the site of the transitory unpredictable precipitous event I wish to record. When it rains the garden pronounces an array of wet locutions, from the interrupted drop of rain lolling through the creased guttering of leaves, to the hollow ceramic timpani of a garden pot I must fill and the occasional plink of a seldom-used trowel.

The field recordings used in the new piece differ from many of my earlier works, which are focused upon recording the sound of what is there. In order to record I make myself absent, ensuring my presence does not intrude. I aim to disappear. Informed by the timpani and plink of things left out in the rain, more recent work has included the initiation of sound, introducing things that sound into the field. There is still a sense in which I am distant (I do not attempt to play the things or acoustically intrude) and there is no desire to force the sonic environment into a musical form. The things become instruments for sounding out place, a means of fathoming the patterns and pause of air and rainfall. The arrangement or gardening of things becomes a sort of physical score, a sculptural and horticultural gamelan for the weathered performance of rainfall. 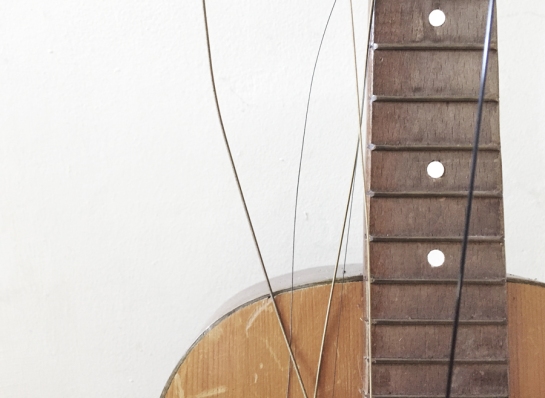 The majority of field recordings used in thunder for three guitars and a trowel were recorded on the early evening of the 18th July. Around 8 o’clock that evening, the sky became yellow, leaves greened, air quickened and shushed. At 8.33pm the first fret of rainfall plucked at the strings of a guitar ‘set up’ with contact microphones and left out to the elements. The pattern thickened as the thunderstorm progressed, the water interrupting the signal from the contacts. Slowly it passed and the garden dripped with the return of birdsong metallizing in the resonance of a crash cymbal and the plaintive wet tick of trowel. The next day I found the silent petrichor of a damp forlorn guitar waiting in the garden, unstrung and murdered by rainfall.
In the aerial garden of the Datsha Radio the rain returns, a low that once moved across a small back garden in Hampshire, now moves across Berlin. A storm now passed continues to excite the air and pour acoustically down.

Listen to the full programme of Datscha Radio’s garden in the air here: http://datscharadio.de/en/